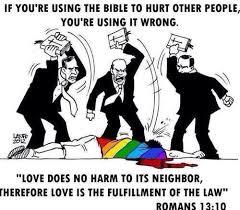 There is a new bill in the state legislature in Missouri that attempts to bridge the divide so to speak between the LGBT community and those opposed to them. The problem is, the bill does not do much to protect LGBT rights while at the same time gives a pass to those

who are promoting discrimination.

At issue here are things such as the famous case of the wedding cake baker who refused to bake a cake for a same-sex couple. That issue was brought to the courthouse to be decided on a state level. However, other states are acting quickly to try to prevent some of the same things from being brought to their borders.

A Missouri lawmaker says that his State Senate bill is still in the early draft stages but that he hopes that it can be a compromise of sorts between the LGBT community and everyone else. The language contained within leaves a lot missing for LGBT advocates. For example, the bill says that it seeks to protect the First Amendment rights of those who have "sincerely held religious beliefs" against homosexuality. In other words, it would protect anyone who says they don't want to serve the LGBT community by allowing them to hide behind the shield of their religion as an excuse. Not only is this discriminatory, but it remains an insult to religious LGBT people who don't like their religion used as an excuse to hate them for who they are.

While this particular lawmaker probably thinks that he is doing something truly positive for the LGBT community, he is really just kicking the ball down the field a little farther. He is hardly making an effort towards really changing anything other than to help protect those who want to discriminate. It is not a step in the right direction.

LGBT advocates want to see bills that promote more protections against discrimination in the workplace and elsewhere. They do not believe that this is too much to ask for. After all, they are the ones who are so often attacked by those with religious views that are hateful towards the LGBT community. The religious community is not the one that is targeted, but they are often the ones who are receiving the most protections when these types of laws are brought up and put in play. Therefore, it is perhaps time to reconsider who is writing the laws and how they are being written. A lot more work could be done towards equality.