Queer Eye For The Straight Guy 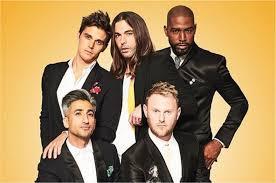 Queer Eye is an American reality television series that was created by executive producers David Collins and Michael Williams along with David Metzler through their company, Scout Productions.

The premise relies on the stereotype of gay men as experts in matters of fashion, style, personal grooming, interior design, and culture. Each episode features a team collectively known as the "Fab Five" performing a "makeover", usually for a heterosexual man: revamping wardrobe, redecorating, and offering advice on grooming, lifestyle, and food.

Queer Eye for the Straight Guy was a big hit back in 2003 for Bravo. The concept of five homosexual men making over a heterosexual man had its charm, as did the five compelling leads who each tackled a certain area of expertise. And yet looking back on the original version, it felt like that show suffered from two key flaws. The first was that these were homosexual men through the lens of a heterosexual guy. It didn’t attempt to “other” the gay men, but it did somewhat reduce them to caricatures of the “gay best friend,” available to offer wisdom and help, but devoid of an inner life. The other problem is that the makeovers tended to all hew towards an ideal of metrosexuality, adhering more to current trends in fashion rather than trying to find something unique for that week’s subject.

Now the show has returned to Netflix with the shortened titled Queer Eye. With five new gay men ready to offer their help to a hapless guy. The new Queer Eye fixes the flaws of the original and, as they point out in the first episode, the new version is about moving from tolerance to acceptance.