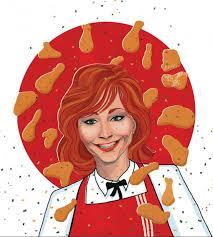 Movies like Wonder Woman are crushing the box office, sexual assault allegations against prominent celebrities are others are being taken seriously, and Reba McEntire has dressed up as Colonial Sanders. It is a changed world for certain, and the people are loving it.

In case you have not heard the news, McEntire has taken on the role as Colonial Sanders in a new KFC ad that pushes the boundaries and then takes things even farther. It is a great way for the fried chicken brand to say that they are willing to do whatever it takes to make the points they want to make.

The commercial is to promote the Smoky Mountain BBQ Chicken offering that KFC has come out with, but that is almost beside the point with this ad. KFC is getting all kinds of free publicity by having the courage to put a beloved female in their commercial as the great Colonial Sanders.

McEntire has stated that she has been a lifelong fan of KFC, and that she took on the role for the fun of doing so, and because she has some nostalgia for the brand. Who wouldn't want to star in a commercial for a brand that they loved? Besides that, the spot is funny and edgy and has probably done some work towards boosting Reba's career a little farther as well (not that she needed the help thank you very much!). 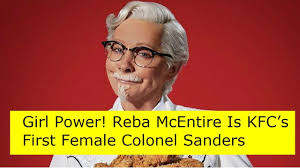 She makes for a very good looking ringer for the Colonial. It is not something that most people would have thought of before hand, but you put the outfit on her and it just works. You can have a little laugh while you are hearing about the new Smoky Mountain BBQ Chicken.

This ad comes on the heels of one from Burger King that promoted the idea of being for net neutrality. A burger chain wading into politics like this may seem like an odd combination, but it actually has seemingly worked out pretty well for Burger King as they have been trying to chase down some of the millennial dollars that are so prized in the market at this time. Given that, perhaps we are in a new era in which companies are no longer abashed about taking overtly political stances so long as they believe that it will benefit them with the support of customers. If that is true, be on the lookout for more pro-LGBT and other types of ads in the near future.